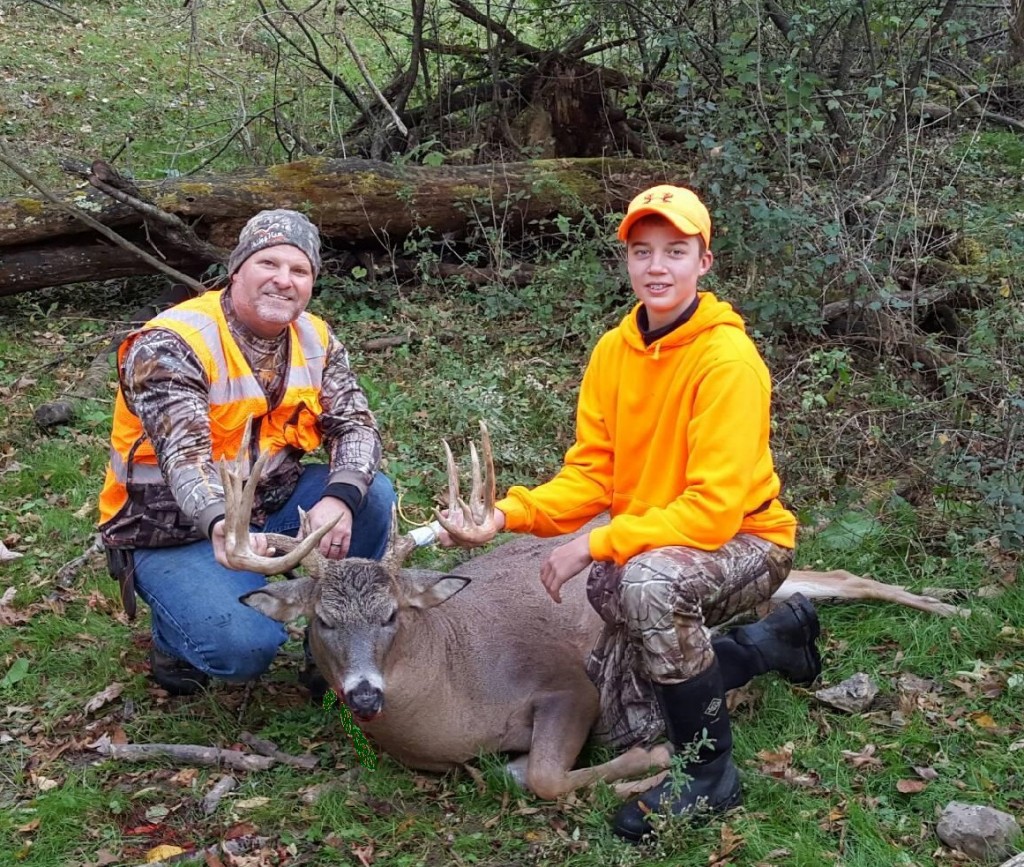 It’s a pretty rare occurrence to write a story about a huge buck that met his demise because of a young hunter’s perseverance along with his family’s mentoring and his family’s teamwork.  It is even more rare to report on a story where a successful young hunter’s neighbors rose to a high level of classy behavior in the face of losing their target buck.  Please take a moment to enjoy just such a story – the story of “Crown”.

After nearly two full seasons of whitetail hunting without tagging a deer, southeastern Minnesota’s fourteen year-old Caleb Nelson was starting to feel frustrated.  His uncle and his Dad had pushed him to try whitetail hunting in 2014, even though he wasn’t raised in a strong hunting family.  Hunting opportunities had always been there for Caleb and his family, but the responsibilities of dairy farm life never seemed to offer enough time to get afield.  Cue Uncle Ray.  Caleb’s need for a hunting mentor was met in large part by his uncle.  After some encouragement and a few scouting trips in early fall of 2014, Ray and Caleb made plans to try the Minnesota Youth Firearms Season together in mid-October.  The four day season came and went without a deer for Caleb.  But there was still a chance for him to hunt during Minnesota’s 2014 3A “Buck” season and even a few days during the 3B “Doe” season.  Once again, Uncle Ray and Caleb hunted hard with no success – fifteen days total to be exact – enough time to take a toll on young Caleb’s enthusiasm for deer hunting.

With the 2015 Minnesota Youth Firearms Season fast approaching, Caleb once again received a healthy dose of pro-hunting encouragement from his uncle Ray.  A new spot was scouted on the family farm, and both hunters agreed that a large bur oak tree near the edge of a corn field would make a great location for a deer stand.  The first three days of the 2015 hunt proved uneventful – Caleb started to doubt that he would ever tag a deer.  October 18, 2015 dawned a crisp morning with no deer sightings once again – Caleb’s frustration was only out-weighed by his numb fingers and toes.  Just as Caleb and Ray were thinking of heading to the truck, a really nice buck suddenly appeared over Caleb’s shoulder.  The giant buck walked directly towards the bur oak tree where Caleb and Ray were sitting.  They watched in amazement as the buck sniffed their tree (they had sprayed some “Nose Jammer” there earlier that morning).  The buck looked at Ray and then down at the ground, and then back up in the tree again.  Caleb swiveled his body and raised his Remington 870 12 gauge shotgun in one motion.  The buck dropped at the sound of the gunshot and Caleb immediately began to celebrate in the tree with the downed buck lying 10 yards away.  Unfortunately for Caleb, the celebration was premature – the buck jumped up and began to run towards the woods.  Caleb’s second shot only grazed the buck, but it didn’t matter; the first shot had done the job and the buck fell to the ground for the final time.  Caleb’s grandparents soon joined the celebration that followed in the family’s woods and exclaimed, “Caleb deserved that deer because he refused to give up – he hunted hard nearly every morning and every night of the hunting seasons for two years in a row.”

Later that night, Caleb started to learn the rest of the story regarding his buck.  As the neighbors heard of the deer’s demise, a few of them stepped forward with trail-cam photos and stories of their encounters with the legendary buck.  One neighbor had named the buck “Crown” because of the way his antlers resembled the crown of thorns from the Bible.  That same neighbor offered a USB jump drive to Caleb full of trail-cam photos and videos – he had been watching the buck intently for the past three years and his heart was set on tagging that buck.  Another neighbor explained how “Crown” had spent summers near his hunting land and he shared his trail-cam photos too.  Even though lots of neighbors had been trying for a shot at “Crown”, none of them felt unhappy to see Caleb’s tag end up on the buck.  Phrases like “Congratulations Caleb” and “Way to go kid” were uttered each and every time a neighbor stopped to admire the monster buck.  Even in the face of losing their personal chances at the legendary buck, all of the neighbors tipped their hats to the young hunter’s good fortune.

Caleb’s hunting success has rubbed off on his younger sister, Mariah, and now she wants to try hunting too.  As Caleb carried the buck’s antlers back toward safe keeping in his bedroom, he beamed “I’m already looking forward to next year!”  Well done Caleb – congratulations!

ABOVE: Crown in all his glory roughly one month prior to Caleb’s successful hunt. 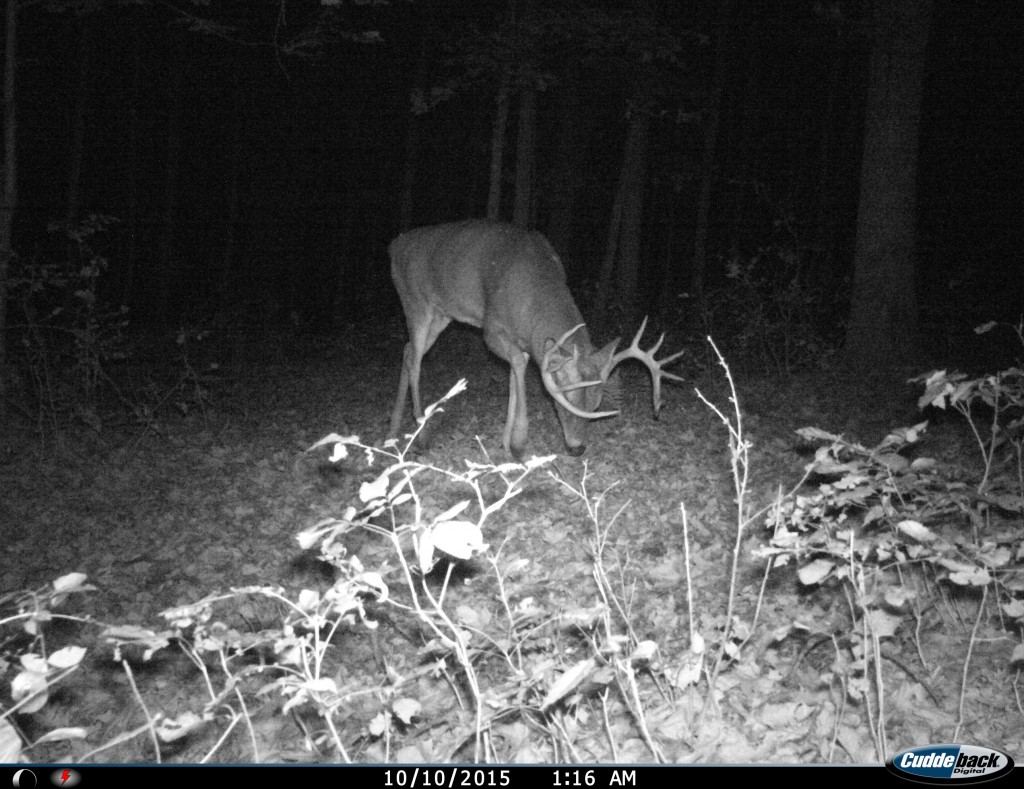 BELOW: Caleb posing with his first deer ever! 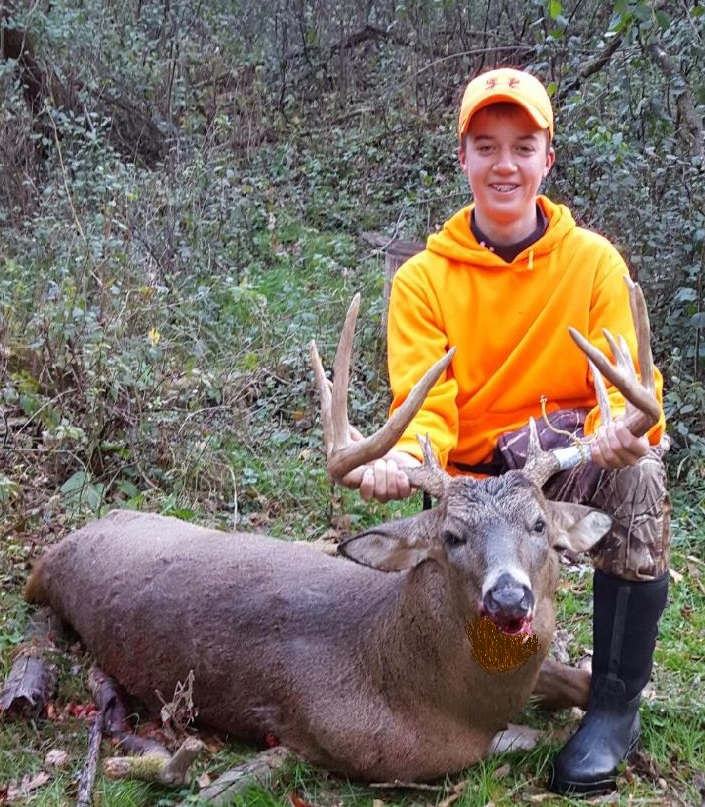